“The austere serenity of Shangri-La.” describes James Hilton in his 1933 novel, Lost Horizon, allured by a land of milk and honey in a hidden valley in the Himalayas. Over the years, this has led edgy explorers to venture deep in the Himalayas, scouting valleys after another, finding their own perceptions of a paradise on earth. For some, this search brings them to Arunachal Pradesh.

Arunachal Pradesh, due to the state’s eastern most location in the map of India, is called “the land of dawn-lit mountains”. The entire terra firma falls under the eastern Himalayan landscape, a land of supreme natural beauty and rich ancient traditions. The altitudinal and climatic variation of the state results in a variety of landscapes and forests which harbor one of the planet’s last great biodiversity.

In the sense of topography and ethnicity, Arunachal Pradesh feels like an entire world of its own. Nine large Himalayan rivers flow through the state on their course to the plains of Assam, including the mighty Brahmaputra. Each of these rivers and their tributaries form spectacular valleys which remain disconnected from each other and to the outer world, due to very poor infrastructure and densely forested mountainous terrain which is hard to conquer. Even today, many villagers in the state have to trek for days to reach the nearest grocery shop. This separation due to geographical extremities has ensured the preservation of a great diversity of ages old cultures, flora and fauna found in the nine river systems. Astoundingly, in a single state as small as Arunachal Pradesh, about 90 different languages are spoken. There are more than 40 tribes and sub-tribes who live here and trace their indigenous history to faraway places in Mongolia and Southeast Asia.

Arunachal Pradesh is definitely the wildest frontier of India! 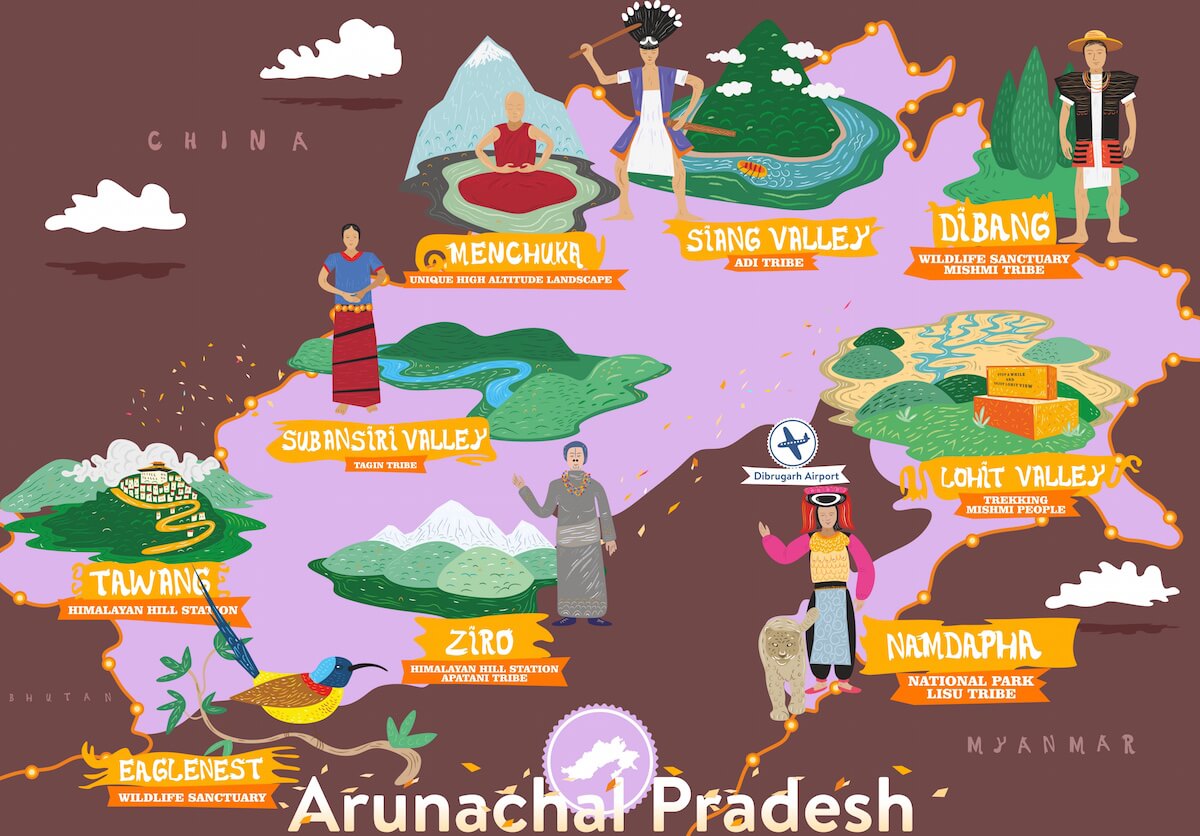 The cultural identity of Arunachal Pradesh is significant, especially in a rapidly urbanizing world. It’s history is mystified, passed through the ages in fables and folk. The state is home to more than 26 major tribes and over 100 different sub-tribes, with traditions and customs as diverse. This has allowed for an amazing linguistic diversity with 90 different languages spoken in the state. Arunachal Pradesh has attracted cultural anthropologists and explorers since long who have come from faraway countries to study the treasure trove of traditional knowledge.

Geographically, the cultural diversity of Arunachal Pradesh can be roughly divided into cultural spheres, on the basis of tribal identity, religion and language. Then there are transition areas where clusters of less dominant tribes reside. The western cultural sphere is rooted to Tibetan Buddhism and early Bon animist traditions with the presence of tribes such as Monpa, Aka, Brokpa and Sherdukpens. The Aka are traders and paint their faces with fascinating black marks. Brokpa are semi-nomadic herders who roam the highlands during the summer. The Monpa weave excellent carpets and take pleasure in wood painting.

In the center and eastern parts of the state, the cultural sphere finds influence from animist traditions and lineage to faraway lands till Mongolia. The major tribes that live here are the Nyishi, Hill Miri, Apatani, Galo, Adi and Mishmi. Nyishi are a powerful tribe, excellent craftsmen of cane and bamboo. The Hill Miri men wear a unique hairstyle, while the women wear cane blouses, fashionable and made from nature. The facial tattoos and nose plugs of the Apatani women have been well document and remain fascinating. The Apatani are excellent in land management, rearing both fish and rice in their farms and building houses close to each other. The Adi have colorful dancing rituals with clothing that have exquisite patterns and designs. Their intricate cane bridges over large Himalayan rivers testify their ingenious skills. The Mishmi are excellent bamboo craftsmen and hunters. They remain an incredible repository of traditional knowledge which has been passed through shamans, folklore, dances and religious rituals.
The southeastern cultural sphere traces lineage to Southeast Asia, where tribes such as Khampti, Singpho and Tangsa have been influenced by Theravada Buddhism. Sharing this sphere are the Nocte, Lisu and Wancho with animist influence. Wancho have beautiful dresses and ornaments. Along with the Nocte, they were excellent headhunters in early times. The Khampti and Singpho are rich traders. Their rulers had mutual relations with the British Empire in pre-independence time, along with connections that stretch though entire Southeast Asia.

Donyi-Polo is the major religion of the animist people of the state; it is the belief in the worship of Sun and Moon. It has had the most influence in the lifestyle across the state. Endogamy between tribes and exogamy between clans is practiced in societies. Polygamy is acceptable and practiced in some of the tribes. Naive, amicable and friendly, the tribals of the state are extremely democratic; each tribe have their own structured institutions that revere the elders, maintaining law and order, settling disputes and caring for the welfare of the villages.

To quote renowned 19th century anthropologist Verrier Elwin “In NEFA (erstwhile Arunachal Pradesh) we are not aiming at a mere preservation of culture the freezing of social life at its present level. We are striving for a renaissance of art, music, beauty, color, the joys and graces of living.” This dream is slowly being realized today. As Arunachal Pradesh opens up to the world, we are seeing promotion and preservation of traditional areas through festivals, sustainable tourism and knowledge houses.

Much of the Land of Dawn-lit Mountains is covered by the Eastern Himalayas, except the southeastern corners of Arunachal Pradesh which fall in the Patkai Hills. Biogeographically, the state is the richest province of the entire Himalayas. The geography of the state is a complex hill system with an altitudinal variation ranging from 50m in the foothills that gradually ascends to peaks which are as high as 7000m, cut through by numerous rivers and rivulets.

The state receives large amounts of rain, spread over 8 to 9 months every year starting from spring to autumn. The higher elevations receive lesser amount of rainfall. This variation in climate and topography has favored the growth of massive forests where a delicate, graceful and symbiotic relationship exists between the tribes, the forest and the wildlife.

Nature has indeed been exceptionally kind to Arunachal Pradesh. The state has five different forest types and a sixth type of secondary forests – tropical forests, sub tropical forests, pine forests, temperate forests and alpine forests. These forests harbor extremely important biodiversity with the presence of over 5000 plant species, 86 land mammals, 500 birds and an equally diverse insect and reptilian life. Such unparalleled diversity of life can be credited to the unique location of the region, falling at the intersection of three different bio-geographic hotspots; the Paleoartic, Eastern Himalaya, and Indo-Burma regions.

Amongst the fauna, in the foothills and adjoining plains large herbivores such as elephant, gaur and wild buffalo inhabit the jungles. The state is perhaps the only place in the planet where 7 wild cats are found together; tiger, leopard, clouded leopard, snow leopard, golden cat, leopard cat and the marbled cat. The jungle canopy of Arunachal Pradesh are home to seven primate species such as hoollock gibbon, slow loris, Assamese macaque, rhesus macaque, pig-tailed macaque, stump-tailed macaque, and capped langur. All the three goat antelopes of India are found in the state; the serow, goral and the mysterious takin. The jungles also have a lively and chattering population of smaller mammals with species of squirrel, porcupine, civets, mongoose, linsang, shrew and bat. In the higher altitudes, exotic species such as goral, Himalayan black bear and red panda are found.

With over 500 species of birds, from the weird to stylish and colorful, Arunachal Pradesh is a birder’s dream. Some endangered and endemic birds found are the white winged wood duck, Sclater’s Monal, Temmincks Tragopan, black necked crane, Bengal florican, Indian hornbill and Mishmi wren. 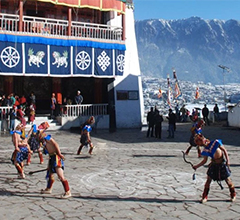 The colorful Torgya is an important festival of the Monpa tribe who reside in the western cultural sphere of Arunachal Pradesh. It is celebrated in monasteries for three days, from the 27th to 29th of the eleventh month of the lunar calendar. Torgya’s significance is to bring peace, good health and welfare of the people. 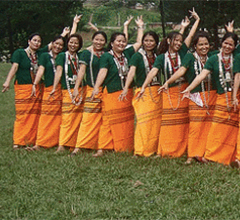 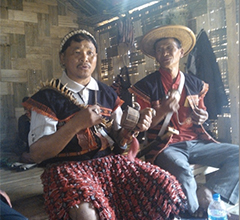 Celebrated during February and July, Reh is a vibrant festival of the Idu Mishmi community, observed to seek prosperity and welfare of families and crop. Rituals, dances, cuisine and folklore are important during this the celebrations. 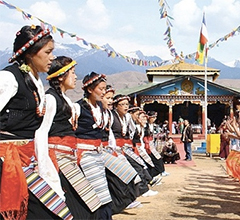 “Losar” or The New Year festival, is the most important festival of Tawang District in Arunachal Pradesh. The Monpa Tribe celebrate this as the coming of a new year. The Monpas are the major portion of the population in the Tawang region of Arunachal Pradesh. 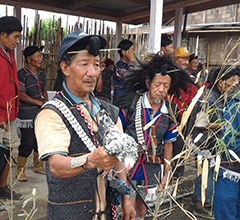 The Dree Festival involves the sacrifice of fowls, eggs and animals to the Gods. Gods worshipped during this festival are Tamu, Metii , Danyi and Harniang. The festival, a part of Apatani culture of Arunachal Pradesh, is celebrated to appease these Gods so as to avoid famine in the society.

Celebrated during January, Si Donyi is a significant festival of the Tagin people. It is rooted to the tribe’s believe that the sun, moon, earth and natural elements play a vital role in the daily lifestyle and tribulations.

The climate of Arunachal Pradesh varies with elevation. Areas of high altitude near to the Tibetan border have an alpine-tundra climate. At mid elevations, the climate is temperate. At the foothills and plains, the climate remains humid subtropical with hot summers and mild winters. The state receives heavy rainfall of 2000 to 4100 millimeters annually, with most rain during the summers from April to October. For this reason, winters remain ideal to travel in the state. The maximum summer temperature is around 35 Celsius. The minimum winter temperature can go below 0 Celsius in higher inhabited areas.