Manipur has been known through the ancient and medieval times through Meetei manuscripts as one of the richest intellectual heritage in Southeast Asia, with roots equidistant from the Indus Valley Civilization in the west and the Hango Ho Civilization to the far-east – the account of its land, people and civilization stretching two millennia. At the crossroads of Asian economic and cultural exchange, Manipur has long connected the Indian subcontinent to Asia enabling migration of people and religions. There is great cultural diversity where various ethnicities have coexisted since ages.
It was the Kingdom of Manipur which during the 20th century joined India after its independence. This however has been contested by groups and has resulted in a 50 year insurgency in the state where lives have been lost and development halted. The recent decade has seen better days though and travelers can today access various areas safely.

The Meetei peoples are the main ethnic community of the state, along with other tribal groups such as Kukis and Nagas, Christians and Hindus. The people of the state are primely into agriculture and forest based sustainable livelihoods.

The oval-shaped state has an exotic landscape with gentle blue hills, lush valleys, lakes, plentiful rivers and deep forests. Literally meaning the ‘land of jewel’, nature has been kind in her beauty here. In the large freshwater Loktak Lake, we can see midst the labyrinthine of boat routes and colorful water plants, small islands that are rich floating biomass on which lake-dwellers live in homes. The Loktak landscape is also the only floating national park of the world, known dearly for Sangai deer which are endemic here. While on the other side on Manipur is Dzukou, a rolling valley covered with an immaculate bamboo forest.

Manipur is truly off the beaten track, a cultural treasure trove set amidst splendid and simple natural beauty. Secrets lie plenty here, such as the perfectness of the classical Manipuri Dance, the roots of Polo gaming history, the Ima market in Imphal run by more than thousand women, the numerous non-touristy festivals, or the border town of Moreh from where we can escape to the secrets of mainland Southeast Asia. 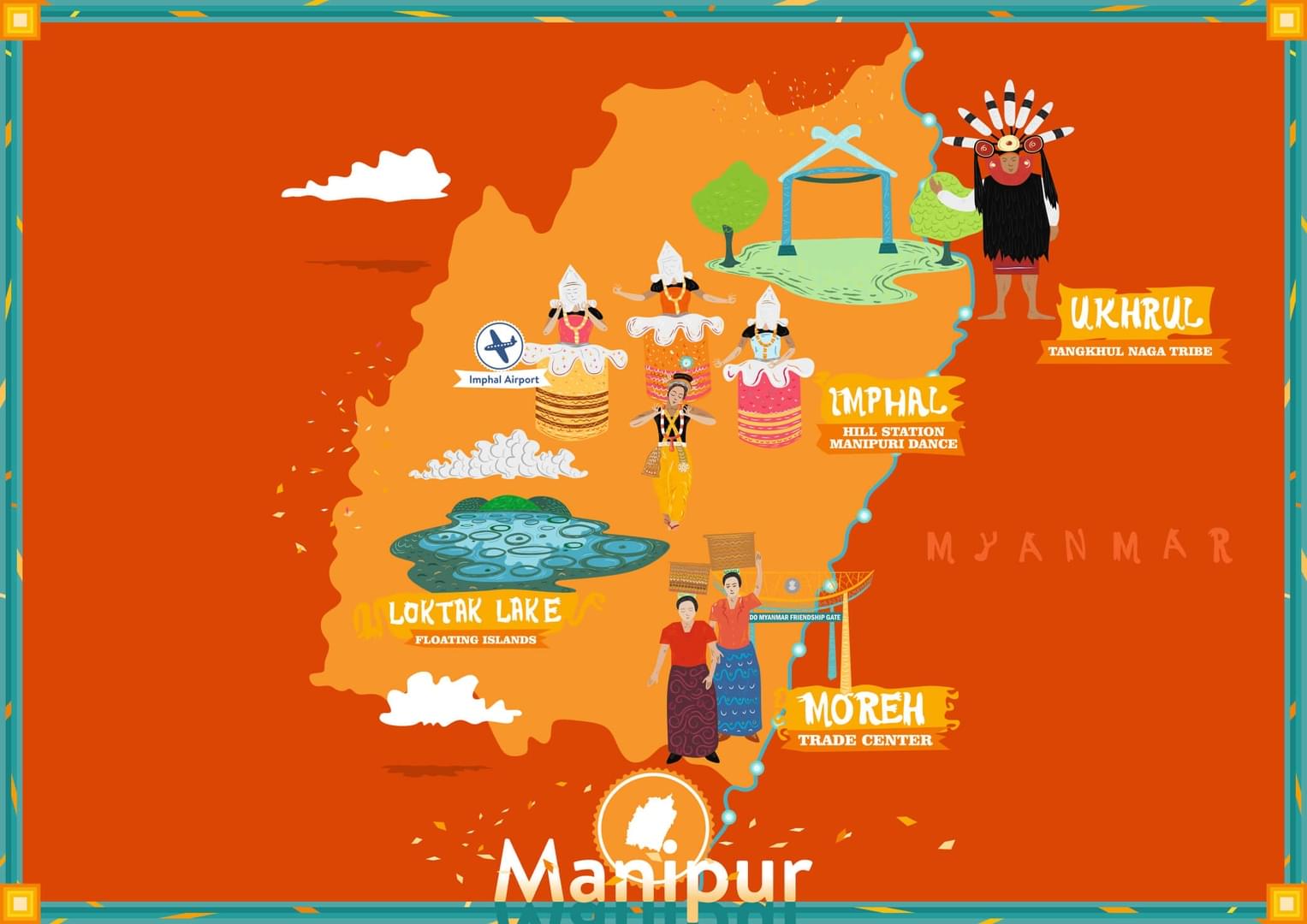 Walled in seclusion on all sides by blue hills, the little gem of Manipur is rich with arts and culture. The people inherently have love for art and beauty as it is hard to find a Manipuri girl who cannot sing or dance. Their creative abilities are best observed in their handlooms and handicrafts which are infested with the mystique of nature. The loving people are superstitious sometimes, but their believes, religions and customs is certainly creditable.
Various ethnicities inhabit the jeweled land and have coexisted since centuries. The Meitei people form the major ethnic group and reside in the valley, along with other tribes such as Naga, Kuki and Mizos who prefer to live in the hills. Hinduism and Christianly is followed extensively along with other animist-based belief systems. The various groups have distinct cultures and traditions which they take pride in. Meitei-lon is the common language of the state used between the various communities. Hindi and English can be commonly found in many areas.

Manipur’s history can be traced back ages and is centered around stories of the forefathers.The land saw the horrors of World War 2 under the British Raj with heavy bombardments which destroyed parts of the Kingdom of Manipur. Today, the war memorial in Imphal stands testimony to this violent history and visitors from around the world come here. Another lesser known war memorial dates earlier, dedicated to the martyrs of 1891 who were hanged on charges of waging war against the Queen of Britain.

For the Manipuri, dance is an integral part of culture. There has been much written on the Manipuri dance, on its lyrical beauty and rhythm. The classical devotional form is distinct than other dance forms of India, famous for captivating beholders with exotic costumes and a simple but graceful rhythm. The common feature of all the dances of the state is a profound devotion to nature. Among the forms, Khamba-Thoiba dance is a duet between a male and female, and is considered as the origin to the modern Manipuri dance form. The Ras Lila dance is considered the epitome of classical Maniuri dance for its elegant nature, being interwoven with the celestial and eternal love between Radha and Krishna that is portrayed so profoundly in Hinduism.

Like all other states, Manipuris has an affinity for arts in the form of handlooms and handicrafts. Age old weaving practices are followed throughout the state mostly by women and is the largest cottage industry. There’s a tale behind the origin of weaving here; it was their Goddess Panthoibee who learnt it after observing and being fascinated by the fine threads of a spider’s hand loomed web. The designs weaved are peculiar to Manipuri cultures, such as the Phanek or snake design which has red and black stripes as found in some of the snakes of the state. For shoppers and flea market enthusiasts, this means variety, from exotic shawls, lasshingphee blankets, cushion covers, blankets, decorations, baskets and various bamboo items.

Lastly, the age-old sporting traditions of Manipuris is relevant when discussing culture. They were a result of wars against small kingdoms and Ava (Myanmar), especially martial arts. Sagol Kangjei, the most popular traditional sport, is said to be the origin of modern-day polo when the British learnt to play it in the 19th century.

Manipur’s geography consists of rivers, lakes, rugged hills, narrow mounded valleys and flatlands. With well more than 60% of the land covered in deep tracts of forests of teak, pine, oak, bamboo and cane, the state is rich in flora and fauna. Broadly, there are four forest types in the state unique by altitude; tropical semi-evergreen, dry temperate, subtropical pine and tropical moist deciduous.
Rare orchids claim superiority in this land. The Siroi Lily can be found on top of the Siroi Hill and is quite spectacular. In total, there are about 500 species of orchids found in Manipur. Colorful and beautiful, they grow perhaps everywhere, in the soil, trees and shrubs.

The fauna of the state is impressive and diverse. Species found include the hoolock gibbon, slow loris, clouded leopard, spotted linsang, bar-backed pheasant, Burmese peafowl and more than 4 species of hornbills. The most mystique creature of this frontier land is the endangered dancing deer. Known locally as Sangai, they have mesmerizing horns and the small herds are endemic only to the floating islands and bushes of Lohtak Lake. Whereas Lengwa or the salamander is perhaps the most intriguing creature. 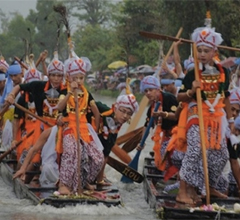 Heigru Hidongba or the boat race festival is observed by the Meities society on the eleventh day of fortnight of Langbal month (September) of Meitei calendar. It is a very important joyous festival and has been observed at the Thangapat (moat) of Shri Bijoy Govindajee, Sagolband, Imphal. This festival had been observed since 984 and 1074 A.D. This festival marks the racing of two boats with pomp and spirit. 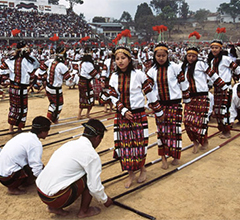 Kut is an autumn festival of the different tribes of Kuki-Chin-Mizo groups. The festival has also been variously described as Chavang-Kut or Khodou at different places amongst different tribes. It is a happy occasion for the villagers to celebrate their food stock after a year of hard labor. The festival is celebrated with a thanksgiving feast paired with songs and dances in honor of the giver of an abundant harvest. 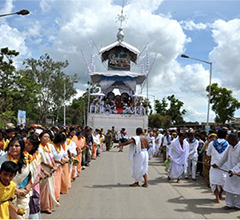 Rath-Yatra or Kangchingba is a festival of Meitei Hindus. Idols of Shri Jaganatha, Shri Balarama and Shri Subhadra are worshipped during this Yatra festival. The idols are drawn in the Rath (car) of Shri Jagannatha. The Rath is big and tall (nearly 20 ft height with six iron wheels) and is pulled by the devotees on the days of Rath Yatra and Puma Yatra as well. 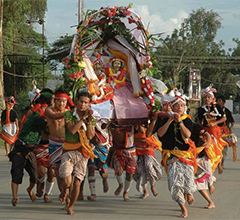 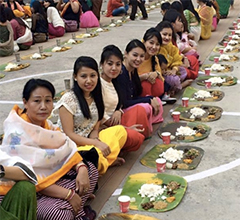 On the second day of October to November of every year the festival is celebrated in Manipur. Also known as Ningol -Chakkouba (grand feast arranged for sisters), this festival celebrates the great festivity of the sisters of each and every family of Manipur. Even though this festival is observed for one day only it bears a significant impact on the Manipur society. This system was introduced as in 33 B.C. following the Manipuri myths.

The climate of Manipur is influenced by the topography. Summer months though hot and humid for a large part, receive in the form of relief ample rainfall from April through mid-October, with rains peaking during the monsoon months of mid-June to September. Winters, lasting from November to March, remain dry and cold, especially in the hills where temperatures can drop below though zero bringing frost and rarely some snow. Day hours during winters are generally sunny and warm, making the season ideal for exploring the outdoors.