Land of the Highlanders

The state of Mizoram is popularly known as the songbird of India and is one of the smallest states in the country. The name Mizoram signifies the land of the Lushai highlanders. It is located in the southern corner of Northeast India nestled mainly between Myanmar and Bangladesh, but also shares a part of its boundaries with its neighboring states of Assam, Manipur and Tripura. The hilly region of Mizoram was previously a part of Assam but was later made a separate state. It is a diverse land with mountains and valleys as well tribal villages and urban centers with modern culture and lifestyle unlike elsewhere in India.
Shrouded as the mist that prevails the hills, not much is known or was recorded about the history of Mizoram. The oral traditions of most tribes of Mizoram believe to have originated from Khul, a mythical cave in southern China which was believed to be a hole in the earth. The tribes then migrated westwards to Manipur, then southwards to Assam and finally settled in the hills of Mizoram and Chin region of Myanmar. Prior to the arrival of British, the tribes had independent chiefdoms and some were tributary chiefs to the kings of Manipur. Mizoram was the last territory to be explored and conquered by the British in India in nineteenth century. The tea plantations in Cachar area of southern Assam near the foothills of Mizoram were often subjected to raids by the hill tribes. This led the British to send military expeditions to the Lushai hills in 1840 to revenge the hill tribes. Opportunists as they were, the British eventually colonized the hills with the help of the Thadou tribe in 1850 when the tribes were at war with each other. The Mizo hills finally became a part of British India in 1895; the northern area was a part of Assam while the south was a part of Bengal. Both parts were merged together to form Lusai Hills province. After independence, Mizoram was carved out as a separate state from Assam after decades of insurgency when the hill folk demanded for self rule. Peace was restored in 1986 and ever since Mizoram has become a peaceful and highly literate Christian state where the air carries folk, music and scents of flowers.

Aizawl, located near the Tropic of Cancer, is the bustling hilly capital of Mizoram. Though a small town with large churches, it is interesting to see fashionable urban culture and modern lifestyle of its residents. Lunglei in the southern part of Mizoram is another important town, it was the centre of administration during the British colonial days when the British troops conquered southern Lushai Hills and built Fort Lunglei. Small towns such as Champhai, Serchip and Saiha also developed in the recent decades due to border trade with Myanmar. Hmuifang, located near the cliffs of Hmuifangtlang is a small town which has significance for tourism and adventures.

This landlocked little state is a land of scenic beauty with a variety of landscape from the ridges of Aizawl, deep gorges of Hmuifang, valley of Champhai to the lofty peaks of Blue Mountain National Park. The hills are also blessed with beautiful water bodies such as the Vantawng Falls, Tam Dil and Rih Dil lakes that have attracted many visitors who seek to enjoy the scenery of the highlands. Though the indigenous people may have been influenced by western missionaries, they still believe in the old tribal practices of welcoming visitors whole heartedly and a sense of old folk life prevails the atmosphere. 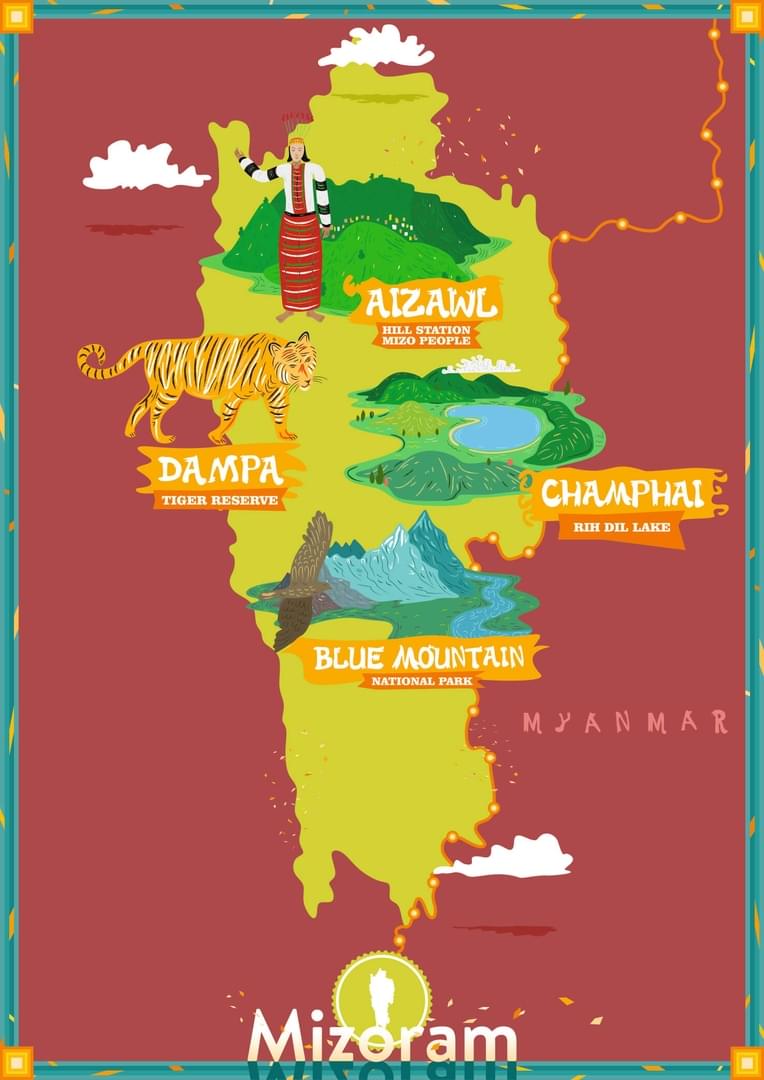 The culture of Mizoram is well known for the colorful attire of the womenfolk, their musical festivals and the popular Cheraw bamboo dance during the festivals. The people of Mizoram mainly comprises of various Tibeto-Burman groups of Kuki tribe such as Hmar, Lushai, Ralte, Pawi, Thadou and Zou. However with a sense of unity they prefer to call themselves as Mizo as most of the tribes speak Mizo Tawng, the common language. The term Kuki, referring to the frontier highlanders, was used by the neighboring Bengali people of the plains. They are also referred as Chin people by the Burmese. The Mizo tribes dwell mainly in the Lushai Hills and also in the surrounding mountains of Chin region of the Kingdom of Myanmar.
The Hmars were the first group to enter Mizoram. Their place of origin is believed to be in China and they made their way through Myanmar by learning and adopting cultures of the Burmese tribes of Shan mountains. They are also known as northerners as many Hmar villages are also located in the northern neighboring states of Assam and Manipur. Though the Hmars were savage headhunters, they are also known for their colorful costumes and ceremonial dances. Ralte tribe is one of the largest Mizo groups, they live in Champhai area and resisted invasions of other tribes, having stone carvings which depict their history. Zou tribe dwell mainly in the areas bordering Chin hills of Myanmar, have their own language and the Zoulai script. Zous also protested activities of British missionaries as they preserved their old Sakhua religion. The Lushais are the largest Mizo community. The Lushais were headhunters and also practiced slavery of captured enemies, similar to most tribal cultures of Southeast Asia. Their conflict with the British eventually led to the discovery and colonization of Mizoram. Some Lushai people also consider themselves to be Jews of Bnei Menashe, one of the lost tribes of Israel. The Lai and Mara are two other major tribes of Mizoram who are culturally different from other Kuki groups, inhabitanting parts of southern Mizoram and having their own languages and script. The Reang people (Bru tribe) of Mamit area near Tripura are considered as one of the oldest inhabitants of these hills, they are however a smaller community now in Mizoram. They were believed to have been exiled by Tripuri kings. The Chakma tribe of the Chittagong hills of Bangladesh also have settlements in the foothills of Mizoram bordering Bangladesh and follow Theraveda Buddhism.

Various tribes migrated from different places, arrived in waves and made these hills their homeland. However, few aspects of tribal culture continue to remain common among all the groups of Mizo society. All the tribes practiced Jhum cultivation as many migrated in search of better pastures. Hnatlang, or community service was an important activity for community welfare. All villages had Zwalbuk dormitory, the central point of the village where Mizo youths were trained to carry out social responsibilities. Above all, most Mizo tribes believed in the ethics of Tlawmingaihna moral code which made them courteous and helpful to others. Most of the Kuki-Mizo-Chin tribes were then converted into Christianity by the missionaries during the colonial period. They benefited from the western education and soon became a progressive community.

The people of Mizoram are experts in cane and bamboo work as they prepare numerous items of bamboo, right from the cane walls of their houses to furnitures and cane hats. Due to the presence of abundant bamboo forests in the state, the hill folk utilize this gift of nature for their daily domestic use and has now become a part of Mizo culture. Basketry is a popular craft, baskets such as Paikawng, Thulte and Tlamen of various shapes and sizes are crafted for different purposes. Bamboo furnitures such as Herhsawp stool, Thuttleng chair and Tuium water containers can be seen in most households. The Mizos also smoke the cane to make it durable and long lasting. The ceremonial Khumbeu hats are made out of the waterproof Hnahthial leaves. Mizo women excel in weaving. Puanchei and Kawrchei textiles are the beautiful costumes of Mizoram worn during the Kut festivals and Cheraw bamboo dance.

The terrain of Mizoram is entirely hilly as the state lies along the Lushai hills. Phawngpui, or Blue Mountain, is the highest point of the Lushai hills with an elevation of 2165m. The Lushai Hills are a part of the Chin Hills and Arakan mountains of Myanmar. The altitude of the hills gradually increase as one travels towards the east. The average height of the hills are 1500m at which most of the towns are located. The densely forested hills have been well preserved since the time of the Mizo chiefs and are thus rich in biodiversity and nature.
Mizoram has the third largest forest cover in India. Tropical forests are found throughout the state. Almost half of Mizoram is covered with wild bamboo forests. It was due to the dense vegetation of the hilly terrain for which the state was the last region to be explored by the British in India. Mizoram is blessed not only with scenic beauty, but also with natural resources and biodiversity that integrate South and Southeast Asia of the Indo-Myanmar region. The semi evergreen forests are seen mainly on the foothills and steep slopes in the western part of the state. This is the region where most of the wildlife sanctuaries are situated. These forests act as migration corridors for animals to travel between the plains and hills. Subtropical forests and few coniferous forest belts are found in the eastern part of the higher mountains bordering the Chin region of Myanmar.

Dampa Tiger Reserve, Murlen National Park, Blue Mountain National Park and Ngenpui Wildlife Sanctuary are the main forested areas of the state. Most of them are sub tropical or sub-montane forests depending on their elevation and also have bamboo forests whose undergrowths support numerous animals. Tigers, Clouded leopards, elephants, Gaur bisons, Hoolock Gibbons and Ghorals are found in the highland forests. Mizoram also has birds such as Brown fish owl, Hill Mynah, Crested Eagle,  Ringed Plover, Whistling teal and Pied Hornbill. The colourful Hume Pheasant is the state bird of Mizoram. 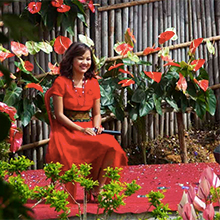 Anthurium festival of Mizoram is the most popular festival celebrated in the state. This festival is celebrated to promote tourism. The Anthurium Festival is organized annually by the Tourism Department in collaboration with the Horticulture Department. The financial support comes from the Central Government. 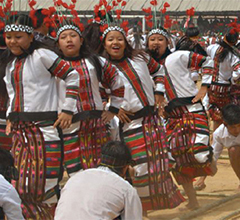 Chapchar Kut is named after bamboo that has been cut and is drying. This agricultural festival is celebrated before planting begins. The festival is celebrated in the month of March. Cheraw or the bamboo dance is a big part of the festival. Different styles of dance performances take place amidst beats of drums. Art, handicrafts, concerts, flower shows, and cuisines also play a major part of this festival. 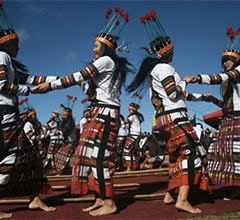 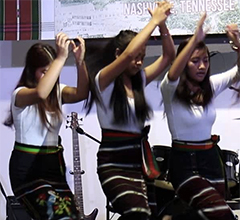 One of the major festivals of the Paite community, Khuado Kut is celebrated as a thanksgiving festival when all the harvesting work is done. This festival is held during full moon nights which are regarded auspicious for this event. The term Khuado is a combination of two terms – khua and do. Khua means a village or town. Khua indicates night time or darkness. Khua also refers to the deity Khuanu/Khuazing of the past animistic Paite Zomis.

Mizoram has a sub tropical climate due to its location below the Tropic of Cancer and also for its high altitude, due to which it enjoys moderate temperatures and a pleasant climate almost throughout the year. Due to abundance of forest cover and the hilly terrain, this part of the country also receives plenty of rainfall from May to September. During the winters, daytime is pleasant but it can be cold at night. With clear skies from October to April, the months remain suitable for exploring Mizoram.