Hidden away in the subtle hills of eastern sub-Himalayas is Meghalaya, one of India’s most beautiful state. It is a land blessed with bountiful rainfall, sunshine, virgin forests, high plateaus, breathtaking waterfalls, clear rivers and meandering streams; a land of ancient cultures where the people are smart, intelligent and friendly. In Sanskrit, Meghalaya means ‘the abode of clouds’ and signifies the state’s rightful claim as being the wettest place in the planet. Most of the state is covered by vast expanses of tropical primary forests and flourishing with biodiversity of plants, mammals, birds, reptiles and insects. Some of the small pockets of forests are known as ‘sacred groves’ which have been preserved since ancient times by local communities due to religious and cultural significances. Three ancient tribes inhabit the land and live a free autonomous lifestyle which allows for their practices to be preserved. While the Khasis and Jaintas come from the ancient lineage of Proto Austroloid Monkhmer race who are considered one of the first settlers in India and reside in the Khasi and Jainta Hills, the Garos belong to the Tibetan-Burman race and reside in the Garo Hills. Fascinatingly, the cultures of Meghalaya have a matrilineal society where inheritance and lineage is passed on to women. In his observations, anthropologist David Roy notes this aspect as “a man is the defender of the woman, but the woman is the keeper of his trust”. Agriculture is the predominant source of livelihood of the people but other sources include mineral based industries, forestry, horticulture and cottage houses that promote traditional arts and crafts. The flowers of Meghalaya are renowned around the world and in recent years approach to organic and sustainable farming of various produces has been exceptionally promoted in the state. The fascinating close relationship that can be observed when humans live alongside and in tune to the natural environment can be observed in the lifestyles of the people of Meghalaya. From creating sacred forests to building bridges out of living roots, beliefs in forest spirits and stone monoliths, some of the most cleanest villages to be found in Asia, an approach to an attitude to be as compassionate and benevolent as nature, Meghalaya delights with plenty of secrets for travelers who seek an adventure off the beaten path. 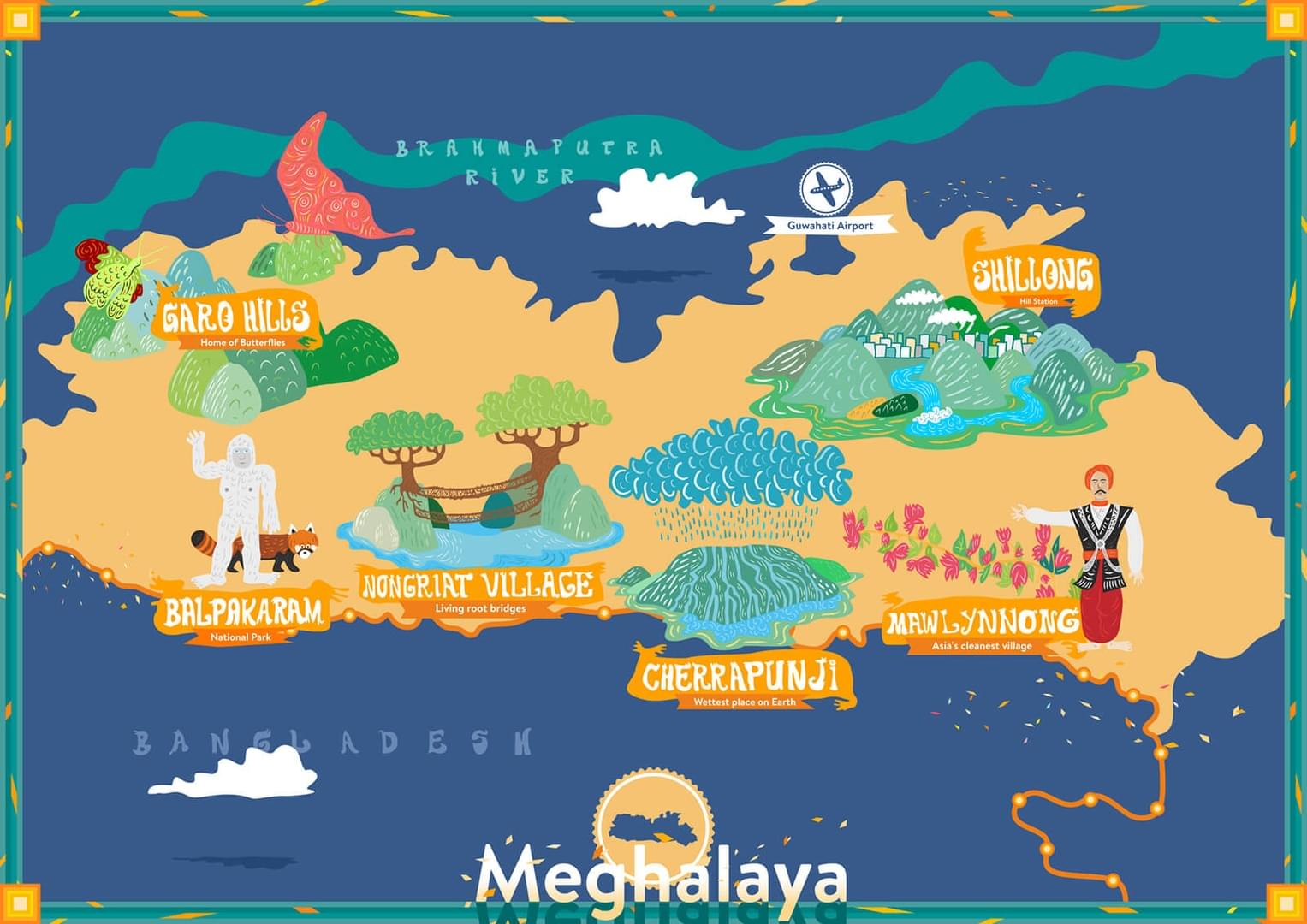 Meghalaya is home to three indigenous tribes, the Khasis, the Jaintas and the Garos. The three tribes live in distinct parts of the state; the Jaintas occupy the Jainta Hills of eastern Meghalaya, the Khasis occupy the Khasi Hills of central Meghalaya while the Garos reside in the western Garo Hills. The Khasis and Jaintas along with the Bhois and Wars are collectively known as the Hynniewtrep people. Belonging to the Proro Austroloid Monkhmer race, they are one of the earliest ethnic group of settlers of the Indian sub-continent. The Garos who prefer to call themselves as Achiks and their land as Achikland, belong to the Bodo family of the Tibeto-Burman race and are believed to have migrated from Tibet.
The people of Meghalaya predominantly follow a matrilineal system where lineage and inheritance are passed through women of a family, where remarkably the youngest daughter inherits all the property and cares for aged parents and unmarried siblings. When there is no daughter in a family it is not unusual for the parents to choose another female such as a daughter in law as the heir to the house and all their possessions. It is worth mentioning that Meghalaya has one of the world’s largest surviving matrilineal culture.‍‏

As per tradition, the Khasis believe that their religion is given by God and is based on the belief of one supreme God who is the creator U Blei Nongthaw. A Khasi is a deeply religious person with an intense love of live. He believes that life is God’s greatest gift and is accounted for in the hereafter. The Jaintias have the same religion but have been also influenced by Hinduism. The Garos too believe in one supreme creator Rabuga who is the sustainer and commander of the world. Other spirits act as his representative, are appeased by sacrifices but never worshipped. The village headman remains the religious head of a community. Though many from the tribes have today converted to Christianity, the ways of the ancients still remain a part of lifestyle and culture.

The Khasi and Jaintia tribes are particularly fond of songs that praise their land and nature; their landscape of hills, lakes and waterfalls. The Garo songs are folk related, dedicated to marriage, birth, festivals, love and serious deeds. The state also has a liking for western music with many rock bands that perform over the country and hosts major concerts of popular national and international artists.

Weaving is an ancient craft of the three tribes, used on both cloth and cane. Cane mats, stools and baskets are famous. The Khasi cane mat called Tlieng can last for around 30 years. Musical instruments like mouth organ, flute and cup violin are also made from cane and bamboo, along with other indigenous products such as tobacco pipe and tribal weapons. The people of Meghalaya are majorly into agriculture, growing common crops such as rice, maize, potato, jute, mesta, cotton, areca nut, ginger, turmeric, betel leaf and black pepper along with fruits such as orange pineapple, lemon, guava, jackfruit and bananas. Arts and crafts are also a popular occupation which preserves their ancient knowledge. In recent years, horticulture has been promoted with an approach to sustainable organic farming resulting in making some of Meghalaya’s flower the best in the world. However, it is to be noted that rampant illegal and unscientific coal mining is prevalent in the state which is a growing threat to locals and environment.

Meghalaya is a mountainous land geographically rich with stretches of valleys and highland plateaus that remain laced with caves, waterfalls and forests. Though richly deposited with minerals such as coal, limestone, uranium and sillimanite. The state does not have a functioning mineral industry. There are many rivers in the state mostly rain-fed and seasonal. Shillong Peak at the center of Khasi Hills is the highest point in the state at 6,434 ft.
Almost seventy percent of Meghalaya is richly endowed with beautiful forests, considered to be among the richest botanical habitats of Asia. Most of the state consists of dense and open forest lands which fall under reserved forests, protected forests and national parks. There is a rich diversity in the types of forests here; there are sub-tropical pine forests, grasslands, bamboo forests, evergreen forests and moist deciduous forests. Due to the excess rainfall, there is a vast variety of floral and faunal biodiversity. The Nokrek Biosphere Reserve and the Balphakram National Park are considered to be the most biodiversity-rich areas of Meghalaya. In addition, there are three wildlife sanctuaries; Nongkhyllem WS, Siju WS and the Bhagmara WS famous for carnivorous pitcher plans.

Small pockets of ancient forests known as ‘sacred groves’ can be found across the state which have been preserved by the communities since hundreds of years due to religious and cultural beliefs. These forests are reserved for community rituals and remain protected from all exploitation. Collectively, they protect and preserve numerous rare plant species and act as corridors for animals.

The varied climate and topography of Meghalaya allows for vast diversity of flora, including parasites, epiphytes, succulent plants and scrubs. Sal and teak are two most important trees. Then there is diversity of fruits, vegetables, spices and medicinal plants. A fascinating 325 species of orchids are found in the state.

The faunal diversity of Meghalaya is equally stunning with the presence of mammals, birds, reptiles and insects. More than 140 mammals are found in the state. The important ones are elephants, bears red pandas, wild cats such as tigers and leopards, civets, mongoose, rodents, slow loris, weasels, fair, wild buffalo, deer, wild boar and primates such as the hoollock gibbon. There is large variety of bats; the states numerous limestone caves are home of India’s rarest bat species. Common reptiles include lizards, crocodiles, tortoises and numerous snakes such as python, copperhead, green tree racer, king cobra and vipers.

Meghalaya is a very important bird habitat hosting more than 600 species of which many are endemic to the region and surrounding areas.There are 34 species of birds in the state which are listed as worldwide threatened and 9 species remain critically endangered such as the oriental white-backed vulture and slender billed vulture. Important birds of the state include greater spotted eagle, hornbills, blithe kingfisher, white cheeked hill partridge, grey peacock pheasant and the tawny breasted wren babbler. Almost a quarter of India’s butterfly species can be found in this tiny state. 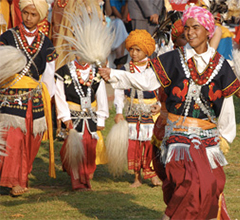 Nongkrem Dance Festival (held annually in November) is a five day festival which is celebrated for the harvest thanksgiving by the Khasi tribe. The Nongkrem Dance is the most important festival of the Khyrim state. The festival is associated mostly with goat sacrifice and is held at Smit, which is around 15 kilometres to the southwest of Shillong. 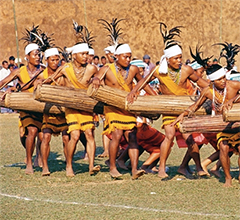 Wangala or the harvest Festival runs for two days. The festival is dedicated to the sun god of fertility. Wangala is the greatest traditional festival of Garo tribes, who live in Meghalaya, India, Assam and Greater Mymensingh in Bangladesh. The tribes celebrate this festival at every harvesting period in late autumn. The festival falls during the second week of November each year. 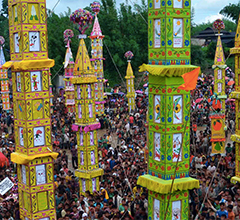 With an average rainfall of 12,000 mm (470 in) in some areas, Meghalaya is the wettest place on earth, though most of the rain falls during the monsoon season from June to October. The weather from April to October is a mix of hot-humid and cold-rainy days with the rains peaking during the mid of monsoons. Summer nights are cool/cold depending on the elevation. The weather during winter months remain dry. Day hours are sunny making the season ideal for the outdoors. Nights are cold depending on elevation and subzero temperatures are common in higher elevated parts of the state.