The mountainous state of Nagaland is located on the eastern boundary of Northeast India bordering the Kingdom of Myanmar and remains home to the sixteen Naga tribes, each with distinct culture, tribal traditions and language. It is a land of festivals and folklore that have been passed down for generations. Nagaland has always attracted numerous visitors and curious anthropologists from around the world, who have come to learn more about the tribal lifestyles of these once-headhunters. Nagaland hosts the popular Hornbill Festival every year in December, which is one of the biggest tourism event in the Indian subcontinent.
Not much is known about the history of the earlier times of the Naga people and their land. The ancient Hindu text Mahabharata has reference of the ogress Hidimba after which Dimapur was named. Dimapur was the first capital of Dimasa Kachari civilization on the banks of Dhansiri river during antiquity, few monolithic carvings and historical ruins still remain. The Dimasas often faced raids from the hill tribes and eventually shifted their capital in the middle ages. The British explorers reached the Naga Hills in 19th century with the hope of baptizing the natives and finding a new route to Burma. Their expeditions faced resistance from the Angami tribe of Khonoma village and their missionary activities were protested by the Zeliangrong tribe. The Naga Hills came into importance during World War II when the Japanese invaded India to overthrow the empire. The Japanese aimed to reach Dimapur rail line and cut off British supplies to Imphal airfields by capturing Kohima ridge. The Imperial Japanese Army entered the Naga Hills and captured Kohima after a fierce fighting took place. Their defeat at Kohima changed the course of the war. The tribal hill tract of Naga Hills was later carved out of Assam and made a new state named Nagaland. The Nagas however from observations are much unlike mainland Indians and have always considered themselves to be the owner and governor of their land. These remote areas appear neither a part of India, it is in all regards a realm of the incredible Nagas. And their dream of Nagalim, a Naga nation unites them.

Kohima is the capital of Nagaland and is better known as the venue of the Hornbill Festival. It is also a historic town which witnessed important battles of the Second World War. Dimapur, located at the foothills, is the largest town of Nagaland. Dimapur is a commercial centre and is well connected with other towns in the region. It also connects Nagaland with other parts of India with regular air and rail services. Wokha and Mokokchung in western Nagaland were the first towns in the Naga hills to be established by the British. Small towns such as Mon and Tuensang in easter Nagaland are significant cultural centers where it is still possible to meet some of the tattooed headhunters and listen to their stories of deadly savage escapades.

Many remote parts of Nagaland can be considered as the wild eastern frontier of India as these places have been explored only in recent times. The beauty of Nagaland can be seen in the lofty mountains of Japfu mountain, mesmerizing Dzukou valley, forested Patkai hills and also in the tribal villages. Many Nagas still preserve their old traditions and remains of their indigenous culture. Though the people were brave warriors in the past, they are now warm hosts to the visitors. 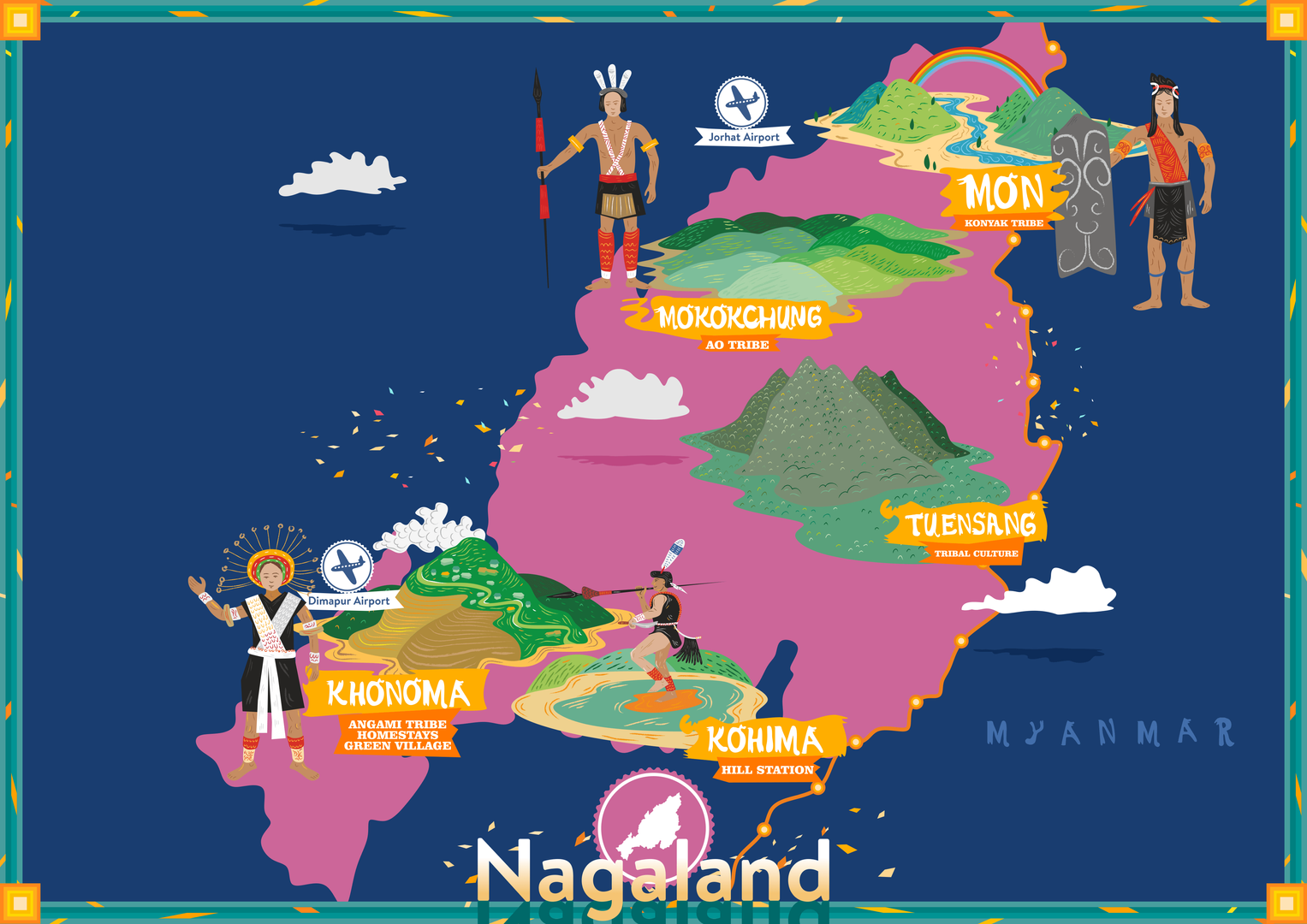 The people of Nagaland mainly comprises of the Tibeto-Burman tribal communities of the Naga tribes of the mountains and the Kuki and Dimasa tribes of the foothills. Some of the Naga tribes also inhabit in neighbouring states of Arunachal Pradesh, Manipur as well as Sagain state of Myanmar. During the colonial British era, the tribal territory of the Nagas was administered differently as the colonial masters avoided interference in tribal affairs. This led to well preservation of their tribal culture. Few of the Naga tribes had earlier practiced head hunting as war trophies, which was later banned during the modern times with the advent of western missionaries and spread of Christianity in 1970s.
The Ao tribe of Mokokchung is one of the largest Naga tribes. The Aos became the first Naga tribe to be converted into Christianity by the Baptist Missionaries in 1872. The Angamis are natives of capital Kohima. They are well known for their art, architecture and colourful costumes. The Angamis also practice the interesting stone pulling ceremony where the entire village gathers and pulls a large monolith from the forest to their village marking a chapter in their history.  Chakhesang tribe of Pfutsero are culturally alike to the Angamis. Sema tribe of Zunheboto is also a large Naga community. The Lothas of Wokha district is another prominent Naga tribe who are well known for their bamboo crafts. The Zeliangrong tribe comprises of Zeme, Liangme and Rongme clans. They dwell in remote villages in the mountains of southern Nagaland and Manipur, the Morung (dormitory) at Benreu village is considered the oldest in Nagaland. The Konyaks of remote Mon district were known for their head hunting traditions, many Konyak villages are still governed by their Angh (king). The Konyaks are also well known for their war dances during the Aoling Festival. Few Naga tribes such as Chang, Sangtam, Yimchungru and Khiamungnian coexist in Tuensang area.  Phom, Pochury and Rengma are some of the Naga tribes with smaller population. The clans of Kuki tribe and the Dimasas, who dwell in the foothills near Dimapur are culturally different from the Naga tribes.

Each of these tribes can be easily recognized by their distinct costumes, architecture and rituals. Though they are culturally different from one another, their mythical origins can be traced to the Living Stones of Khezakeno village, from where the tribes migrated in different directions. The Morung dormitory for bachelors is a common structure that can be seen in all Naga villages. The long Log Drums are also part of indigenous culture of every Naga tribe. Another common aspect is their excellence in producing cane and bamboo crafts. The Hornbill Festival, organized by Nagaland tourism department is a good opportunity to observe the traditions and cultures of the different tribes at a single venue.

The tribes of Nagaland produce some of the finest indigenous handicrafts in India. Most of their crafts are made from sustainable resources which are easily available in their surroundings. Due to their dependence on bamboo for daily puposes most tribes have cane crafts. Cane baskets are common among most tribes, the Angamis make tall baskets for storing grains. The Angamis are an artistic tribe who have beautiful wood carvings which can be seen in the large Kharu gateways to their villages. The beautifully carved gates also have elaborate carvings of tribal motiffs. Hand woven Shawls are another popular handicrafts of Nagaland, the patterns and colours vary among tribes. Brass pendants, worn as necklaces by Konyak men symbolized head hunting trophy masks. Konyak women also make beautiful necklaces, bangles and bracelets with little beads. Chang tribe made ivory bracelets and tiger claw pendants in the old times when villagers hunted in the wild. Indigenous designs of tattoos are also unique to Nagaland, tattoos are adorned by the old Konyak men and also by the women of Ao tribe. The decorated hunting spears of Rengma tribe are the most common souvenirs found in the craft markets.

The Naga Hills are extensions of the Eastern Himalayas between the Brahmaputra valley of Assam on the west and the Chindwin river basin of Myanmar to its east. Mt. Saramati and Japfu peak are some of the highest points of the Indo-Burmese mountains, these parts of the state also experience snowfall. The low lying Patkai hills in northern Nagaland are rich in forest resources on which the indigenous people have depended on their livelihood for centuries. Doyang is the only major river of Nagaland, the catchment area of this river is also a hotspot for the migratory Amur Falcons. Dzukou Valley in the southern part of the state is also unique in its landscape with green rolling hills and meandering streams.
The forests in the northern part of Nagaland consists of dense evergreen rainforests. These forests are covered with gigantic trees where sun rays hardly penetrate. Tropical forests are found in the western part and coniferous vegetation is seen in the higher elevation of eastern Nagaland. Temperate forests and rhododenrons are also found near the high peaks of Saramati, Japfu and Dzukou area. The world’s tallest rhododendron tree, as recorded by Guiness Book, is in Japfu mountain. Nagaland also has abundant bamboo forests all over the state. The state is also blessed with over three hundred species of epiphyte and lithophyte orchids. The beautiful Dzukou Lily blooms only for a few weeks during the rainy season in Dzukou valley.

Nagaland also has a large forest cover, some of the major wildlife sanctuaries are Intangki, Rangapahar and Fakim Wildlife Sanctuaries. Nagaland has comparatively a larger number of bird sanctuaries than animal reserves.  Tragopan is one of the most beautiful pheasants of India, the Blythe Tragopan is found only in Nagaland. They prefer high hills where the climate is cold with frost and ferns on the ground. Four different species of Hornbills are found in the tropical forests of Nagaland, namely the Great Pied Honbill, Rufous-necked Hornbill, White throated Hornbill and Wreathed Hornbill. Mammals such as Indian elephant, Gaur bison, Sambar deer, Sloths, Giant squirrels and leopards are found in Rangapahar forest, which were once extensions of Nambor forest of Kaziranga. 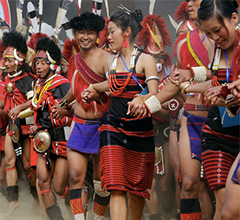 Held during December, the Hornbill Festival is an extravaganza organized by the tourism department, showcasing culture and heritage of the 16 Naga Tribes. 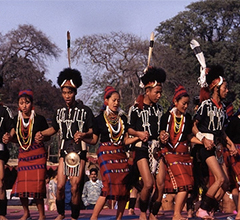 Moatsu is celebrated during the first week of May every year by the Ao Tribe after sowing is completed. Various rites and rituals are performed during this period. 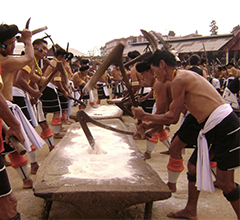 The festival of Sekrenyi is celebrated in the month of February by the Angami people of Nagaland. It follows a series of ritual and ceremony such as dances, feasts and hunting.

The climate of Nagaland is generally pleasant throughout the year due to abundance of vegetation and the hilly terrain. Winters are cold in most parts of the states, places such as Kiphire, Phek and Pfutsero also experience little snowfall due to its high elevation. Summers can be slightly hot and humid in the towns of Dimapur, Tuni and Tizit in the plains. The region receives plenty of rain during the monsoons from May to September.